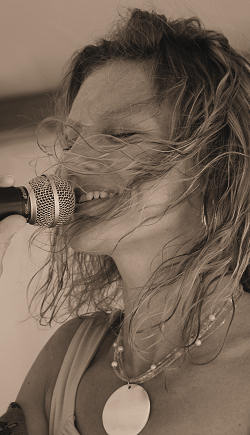 Marjoleine studied vocal jazz/performing arts at the Royal Conservatory in The Hague with Ineke Heiliger and Rachel Gould. Her final exam (1999, theater the Tobbe) contained 4 of her own compositions. After her studies in The Hague Marjoleine followed masterclasses and workshops from The New York Voices and Cathrine Sadolin, and levels 1 and 2 in EVTS (Estill Voice Training System).

Erik van Lier and Henk Meutgeert about Marjoleine : ´Fantastic vocal talent, great improvisation too´ (jury report bigband competition Velsen 2002). Greetje Kauffeld gave her a compliment for her own composition ´Something has changed!´ during the C.v.A. Bigband Festival 2000 in The Hague.

A large part of Marjoleine´s own compositions (lyrics and music) nearly seamlessly border on the known jazz standard repertoire.

Since 1996 Marjoleine is performing with formations ranging from duo to bigband.

*For more information about vocal coaching or for bookings, please use the contactform.